How Much Do Soccer Team Uniforms Cost?

If you are shopping for soccer uniforms for your team, you came to the right place!

Organized league soccer teams need uniforms. Whether you are playing in the Premiere League, MLS, D1 college, high school, travel league, or in a local recreational league your team will need soccer uniforms for every player. The styles, colors, cuts, materials, and other options are nearly endless. This can make the decisions that determine the cost of soccer team uniforms challenging.

How Much do the Cheapest Soccer Team Uniforms Cost?

The cheapest way to outfit a soccer team with uniforms is to start with normal tee shirts and have numbers applied to them, usually through a heat-transfer process. You can then buy inexpensive matching soccer shorts, or have your players wear soccer shorts that they already own. Most soccer leagues will insist that your uniforms have a number on the back of the shirts. The cost of using t-shirts as a basic soccer team uniform will range from $20 to $25 per player. However, unless your players already have soccer shorts, new soccer shorts will add another $10 to $20 per player to the overall cost of uniforms for your soccer team.

How Much do More Expensive Soccer Team Uniforms Cost?

Buying full matching team soccer uniforms is a more expensive option. You will need a home uniform, and an away uniform that would need to be a different color. Nowadays the away team wears their lightest colors which in many cases will be white. The home teams now usually wear their darker colored uniform. Unless your team will always be the home or away team, it’s best to have two complete uniforms, one dark and the other white or light. With soccer team rosters averaging about 25 players, and the price of a stock soccer team uniforms costing between $40 and $60 per player, the cost to outfit an entire soccer team with stock home and away team uniforms would be between $1000 and $1500 per team.

Every soccer team uniform should include at least one and preferably two goalkeeper jerseys. Goalkeeper jerseys must be a different color from their team’s uniform, the opposing team’s uniform and the referee’s uniform. Oddly enough, both opposing goalkeepers may wear the same colors. There are also special goalkeeper shorts which have padding to soften the shock of diving for the ball and hitting the ground.

Goalkeepers often times don’t have numbers on their jersey which is usually OK. When goalkeepers do have numbers, they are typically either 0, 00, or 1.

How Much do the Most Expensive Soccer Team Uniforms Cost?

Buying custom uniforms with your own design and logo can cost between $60-$80 per uniform.  Ordering home and away custom soccer uniforms for a team of 25 players will cost between $1500-$2000.

For a 100% custom design, many uniform providers can include a unique soccer uniform design for a reasonable charge.

What About
Sublimated Uniforms?

Sublimation is a manufacturing process whereby the entire design of the soccer uniform and the related artwork for personalization are infused directly into the fabric.

The uniform designs themselves start out as digital images, which are then printed on wide format printers and use heat and pressure to infuse the color into the fabric. The process is called Sublimation because of the chemical and physical change from the solid colorant state directly into a gas without going through the liquid state. 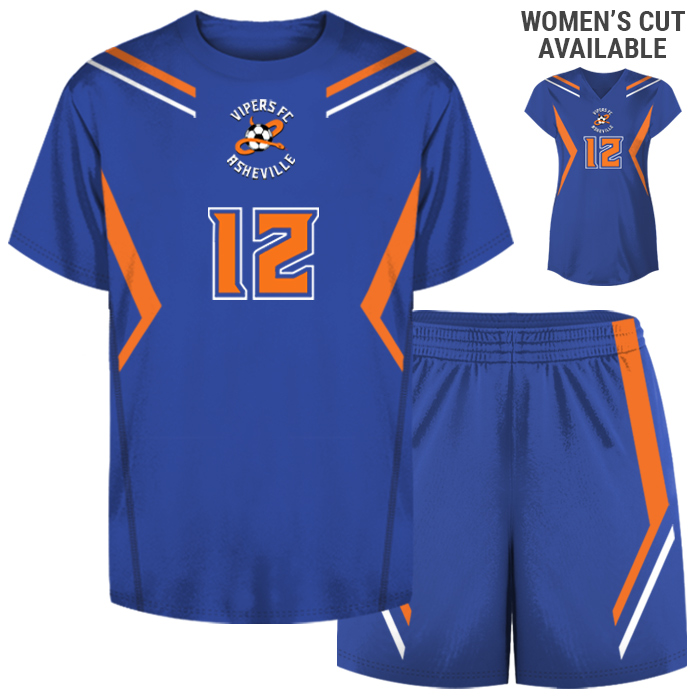 Exactly how does Sublimation Work?

The sublimation process uses heat-sensitive colorants to print text and graphics onto a special transfer paper. The printed paper is then placed onto a fabric pattern, and both are placed into a heat press.

Sublimation doesn’t work with most natural materials, such as cotton. Natural fabrics have no pores to open and accept the gas vapor. The colorants are engineered to fuse permanently with polyester. Additionally, dark fabrics cannot be used in the sublimation process so most sublimated uniforms start out as a blank white polyester material.

Sublimated team soccer uniforms have the following advantages over other types of uniforms:

Durability
Because the vaporized colorant penetrates the matrix of the polyester fabric, the dye actually becomes a permanent part of the fabric. Sublimated soccer uniforms won’t fade, crack, peel, or deteriorate under normal conditions. Sublimated uniforms can last for many years with proper care.

Breathability
Sublimated soccer uniforms are breathable. There are no embroidered logos or screen-printed numbers or graphic elements to block air exchange with the skin. The polyester fabrics used for sublimation are engineered to breathe and wick moisture away from the skin for excellent moisture management properties.

No Minimums
When you need to reorder in smaller quantities, that’s not a problem. The sublimation process is a direct digital process that does not require additional set-up charges that drive up the cost of re-ordering traditional team soccer uniforms.

Team Sports Planet can help you design and manufacture custom sublimated soccer team uniforms that will help your team stand out from the competition. We are here to help you turn your ideas into reality!

What Factors Drive the Cost of Soccer Team Uniforms Up?

Accessories
Adding items like warm-ups, socks, shorts, socks and even shoes will drive the per player soccer uniform cost up.

Rush Charges
Turnaround times for soccer team uniforms are typically 10-15 business days, or about two to three weeks and can cost anywhere between a 20% and 25% rush surcharge. If you don’t plan ahead and allow for manufacturing time and shipping time, you may end up paying for a rush charge and for expedited shipping. Remember that sublimated soccer team uniforms are made to order, including the actual assembly and stitching of the uniform garment, and that process takes time.

Manufacturing Location
Sublimated soccer team uniforms may be manufactured in Asia or some other offshore location. Labor costs may be lower, but ultimately costs like shipping, customs-related charges, and the time required to ship items across an ocean may add up quickly. Domestically produced soccer team uniforms may have higher labor and material costs, but those costs are usually offset by lower costs for shipping and importation. Having to ship software team uniforms overseas by container ships also contributes significantly to carbon emissions.

What Factors Drive the Cost of Soccer Team Uniforms Down?

Offshore Manufacturing
Having your soccer uniforms made overseas may seem like a bargain, but by the time you pay for shipping, and the time it takes for your team uniforms to arrive from Asia or another country outside of North America, it’s not much of a bargain. When your team soccer uniforms are manufactured in North America, they don’t have as far to travel, and North American workers are paid a fair wage and often have superior working conditions when compared to their overseas counterparts.

Quantity
Some soccer teams will want to have separate home and away uniforms. If your team can use reversible soccer uniforms, you can save on the cost of separate uniforms, which will drive the overall cost down. Smaller roster size will also allow you to save money on your soccer  team uniforms.

Advance Planning
Planning the design and purchase of your team’s soccer uniforms in advance and not waiting until the last minute will save you time and money. You won’t need to pay manufacturing rush charges or expedited shipping costs if you plan ahead and leave plenty of lead time for delivery of your soccer uniforms.

Uniform Care
Although sublimated soccer uniforms can last many years in normal conditions, there are certain factors that can cause the design to fade over time. Don’t use chlorine bleach when washing your sublimated soccer team uniforms. It is also advised to not use hot water temperatures when laundering sublimated soccer jerseys and pants. Warm water will work fine. One of the most common ways to cause fading of sublimated soccer uniform colors is to hang them outside in the bright sunshine to dry. The sun’s UV rays will eventually cause the deep sharp colors from the dye sublimation process to fade. The best practice is to dry them by hanging on a clothesline in the shade. Taking good care of your soccer uniforms will allow them to last a long time and save you money in team soccer uniform replacement costs.

Why are Some Soccer Team Uniform Companies More Expensive?

In a nutshell, some companies are more expensive because they offer a higher quality soccer team uniform than their competitors. They may offer better quality polyester fabrics, or they may provide a higher quality soccer uniform design than other companies who sell cheaper team soccer uniforms. They may also have better more modern equipment. When shopping for cars for example, a Ferrari will cost more than a Ford. If you just need a car for reliable transportation, you don’t really need a Ferrari. Be sure to ask questions during the buying process. A reputable soccer team uniform company will be happy to answer your questions and provide useful information to potentially save you and your soccer team time and money.

Why are Some Soccer Team Uniform Companies Less Expensive?

Some soccer team uniform companies are less expensive because they manufacture their products overseas where labor regulations are less stringent, and workers are not always paid a fair wage. They may use lower quality cheap materials to save money on the finished soccer uniforms they sell. Or they may be using older equipment that has already been fully depreciated.

Conversely, some soccer team uniform companies will be less expensive because they have many years of experience with the uniform manufacturing process, and they operate at a high level of efficiency and productivity that allows them to sell cheap soccer uniforms for less.

Be sure to do your research and learn as much as possible about the company and the manufacturing processes they use before you make an important decision on which soccer team uniform supplier you will use for your team.

The best kind of soccer team uniform company is one that has many years of experience and has a great reputation for uniform product quality and customer service. Look for a team uniform company that manufactures soccer uniforms in North America, without the additional shipping time and expense that is associated with overseas manufacturers.

Check the company’s Better Business Bureau ratings and don’t spend your money with a company that doesn’t have an A+ rating.

Team Sports Planet has been in business for over 20 years and has successfully supplied top quality team uniforms to thousands of teams. We manufacture superior quality uniforms here in North America. Our prices reflect our ability to produce premium quality soccer team uniforms efficiently and cost-effectively. We highly recommend dye sublimated soccer team uniforms as well as other kinds of sublimated uniforms for their superior durability and the ability to use intricate designs and multiple colors.

If you are ready to experience the superior quality and customer service that we provide at Team Sports Planet, please follow this link to our uniform builder where you can create your own designs for your soccer team uniforms. If you have questions, please do not hesitate to complete the contact form on this page for more information from a North American-based Team Sports Planet team uniform expert.

Have pricing questions or need help?

Our Commitment to You..Watch This!

ATTENTION TEAM SPORTS PLANET CUSTOMERS AND WEBSITE VISITORS:
Team Sports Planet has great news! We have completed the transition of our Elite and Amped branded sublimated products to a new production partner. We will be accepting new orders for these products effective December 12, 2022, with an anticipated delivery window in the early February time frame. Thank you so much for your patience during this transition!
Dismiss