Baseball’s been around for hundreds of years, having first been played in 18th century England. Sublimated uniforms? Only about 20 years. Give or take.

But in the past few years sublimated baseball uniforms have come to dominate within the sport in terms of their prevalence and usage. Simply put, more & more baseball teams prefer (and purchase) sublimated uniforms. It’s beyond just “trending”.

You might ask: What took so long? And why so? Read on.

Dynamic Team Sports was the first North American uniform supplier to market (to any substantial degree) sublimated uniforms for team sports. They did so about 20 years ago. But they didn’t start with baseball uniforms. Those came years later. With good reason.

Baseball Has Always Been All About Tradition

The thinking at the time was that baseball, being the most tradition steeped of all sports, would be less receptive to the somewhat radical departure in fabrication and decoration technologies that are inherent in sublimation. Compared to, say, basketball. Many baseball teams were still wearing wool! 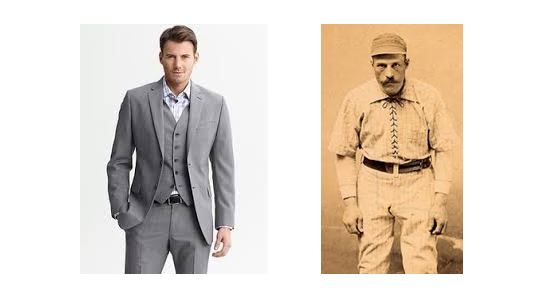 There were also very legitimate design concerns that presented challenges to sublimation, most notably the “full button front” jersey, a widely chosen style and yet one that did not lend itself very easily to the still emerging printing methodologies used to sublimated fabric (decorate using color printing methods).

Early on there were also legitimate concerns as to the durability of sublimated garments. Sure, breezy basketball unis were an easy fit for hoops; but how would the rigors of baseball (or worse yet football) lay waste to the lightweight nature of sublimated uniforms? Again, these were legit concerns that, as time has gone by, have largely been addressed and laid to the wayside.

The benefits of sublimation have grown to be too numerous, relative to any lingering downsides, for any reasonable team or equipment manager to entirely cast off in this day and age. That is a simple statement of fact although not an assessment in totality.

Old habits die hard. That includes old purchase habits and predispositions. Although aluminum bats have a place, wood remains king. Except when it isn’t. Or can’t. Or isn’t practical.

You get the point. While, to a very significant degree, sublimation has surpassed tradition as it pertains to baseball uniforms in the modern era, holdouts do persist.

But it’s kind like saying that I used my old, beloved IBM Selectric typewriter to write the words you are reading. It’s almost romantic to think so. But it’s just not so. Same with sublimation.