5 Things You Should Know About Hydration

You’ve heard it before: “It ain’t the heat, it’s the humidity.” In reality, when it comes to making sure that young athletes maintain proper hydration levels before, during and after practices & games, it’s both. Searing heat alone or life-sapping humidity can cause problems. But together? It’s trouble waiting to happen.

Energy drinks that is. (Red Bull, Rock Star and the like.)  While, okay, they are liquids, their primary ingredient is caffeine. And their primary purpose is to accelerate one’s heart rate, which in the heat of a summer’s day practice or game can be counter-productive.

At some point, your athletes will openly 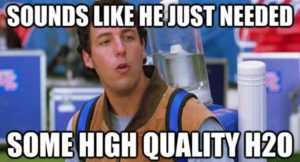 (or behind your back) voice this sentiment. This is sure to be the case if, when we say “water” you mean that clear, unfizzy stuff that comes out of the spigot or the Igloo cooler at the end of the bench. Or they are teenagers. Or just want to drink neon colored stuff.

But the fact of the matter is that plain old water is, for many typical team sports activities, perfectly fine. The period of time between scheduled replenishments should never exceed an hour. Key word there is scheduled. Athletes tend to think of themselves as being invincible. You can not. And, as best you can, keep the plain old H2O as cold as possible.  Nobody likes lukewarm water. ‘Cept bugs.

It’s true.  Ain’t no way of getting around it. 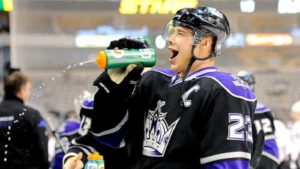 Whenever possible, the best way to re-hydrate from physical exercise is with sports drinks. (For reasons I can’t figure out, a lot of them end in “…ade”; Gator, Power)

The reason for their superiority is simple: Not only do sports drinks replace water, they also replace electrolytes. What are electrolytes? Simply put: They are nutrients. The human body loves ‘em.

Now, depending on the intensity of the workouts or competitions your team is involved in and/or their length (Think: 4 hour extra innings in August), you may not need the added oomph of sports drinks. And they can get pretty expensive pretty quick. Err on the side of caution whenever possible.

If you prefer to have your hydration monitoring done for you, there is, like everything else in the world these days, an app for just that. The most popular one, available in the App Store for a nominal fee ($3.99) is iHydrate. There are also six hundred similar apps that sorta do the same or similar things.