It’s been front page news. It was and is disturbing. Namely, the startling study on brain injuries associated with playing football. Not just NFL players, even as far down the line as Youth Football.

What’s a parent and/or coach to do? Or think?

Obviously, that’s up to you or them. But being an informed consumer/parent/coach/athletic director is a bar that’s pretty easily cleared by most interested parties. So here we go.

Love of the game of football is not going to go away.  But there’s ways to mitigate the risk.

It starts with helmets.

The Virginia Tech Helmet Safety Study has rapidly become the industry standard. Some manufacturers have groused about the methodology and/or results, particularly when their brand is deemed deficient; but most have accepted and adapted.(We here at Team Sports Planet had many a hearty chuckle reading one manufacturer’s assertion that the entire study was “junk” based as it was on “some magic mathematical equation.”)  Let’s just say that science, in the realm of safety, is good for you the consumer than some one’s feelings on the study. 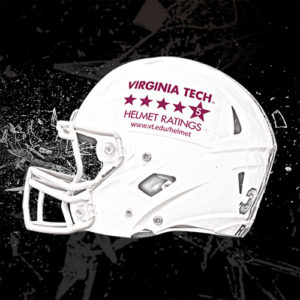 “Like it or not, Virginia Tech has become kind of like the J.D. Power for ranking helmets,” said Chuck Huggins, CEO of helmet manufacturer Xenith.

The other fantastic news is something that may not be so obvious in a quick online perusal of the list. You know how the saying goes “You get what you pay for?” Well, turns out that with football helmets, that’s not so much the golden rule. In many instances the cost played almost no factor. The cheapest were not the worst and the most expensive were deemed to be not much better than a low cost competitive model. So, you, the informed consumer, needn’t “buy on brand name” alone. Performance matters.

While big, jarring hits that directly result in concussions during games are the first thing that comes to mind, the data on brain injury points to a problem with repeated impact to head being the greater culprit. Even specific drills (think: Circle Drill and the like) have been shown to cause concern. Not that concussions aren’t it’s just that, there’s a little more to the actual problem.

So what do you do when it comes down to football helmet safety? We love football. So do you. So do your kids. Your students. Your athletes.

Be informed. Be cautious. Gear Up. And have fun.