Women in the NFL

I don’t suspect that my own young daughter will be the 1st female to play in the NFL.  Not that I wouldn’t support her in that pursuit if she was so inclined, I’d be behind her efforts 100%.

But she has –so far—expressed little interest in sports in general and, well, football might as well be played on Mars for all that she seems to acknowledge even its very existence.  Much to my chagrin.

But in the big picture, here in 2017, I saw an article about Becca Longo, the first female to win a scholarship to play football in college.  (Caveats, she’s a placekicker and it’s at Division II Adams State University).  But still… It got me thinking. 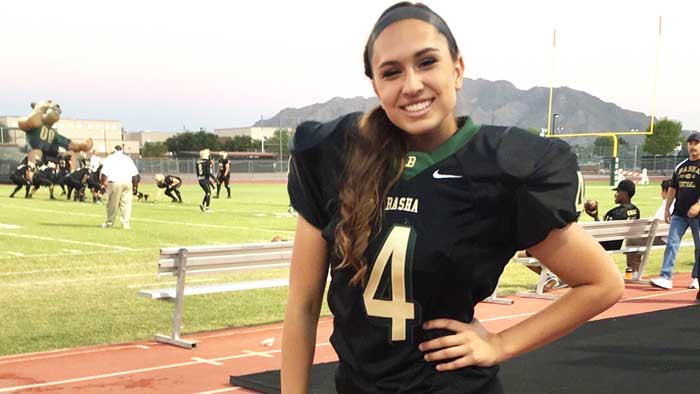 “I’m ready to compete,” Longo said. “I don’t really have any expectations beyond that.”

I’m sure the initial, compulsive response would be:  “Women in the NFL? Never gonna happen.”  Full disclosure, that was my initial reaction.  (i.e., I’m middle aged)

Then my mind wandered to the all female football environment of what was the Lingerie Football League and I was a little stunned to learn that it still exists, albeit having thankfully changed that regrettable name to “Legends Football League”.   And get this, it’s not only national, there are international league branches as well, as in Australia and Europa.  (Will wonders never cease?)

And, Wonder Woman, the movie, directed by a female, is killing it at the box office.

But I digress.  The subject is the prospect of a woman playing in the National Football League.

Women in the NFL?

The answer seems to be yes.  And relatively soon (within 10 years).  Just so long as that female is also a very good placekicker. Make that excellent. Because there’s nothing really stopping that from happening. At least physiologically.

There’s that Kleenex commercial on TV that features what looks to be a 12 year old girl playing Pee Wee football.  It could be her or one of her like-minded friends.