ALIBABA HAS A THIEF

What’s in a design?  That which we call a uniform.

They say that “imitation is the sincerest form of flattery”.  May be.  But someone (a company) stealing our idea (a uniform’s design) and then undercutting us on price is a whole other thing.   It’s –plain and simple – thievery.  Let me explain.

It first came to our attention that some guy from Alibaba liked (on Facebook) a pair of custom softball pants we offer.  They are really sharp looking and that’s understandable.  This is unremarkable, in fact, it happens every day.

It is important to know that this is a style that WE designed.   We offer them exclusively.  Since they are sublimated, the most notable aspect of the uniform is the STYLE. (Note: The United State Supreme Court is currently reviewing this issue in a case involving Varsity brand cheer uniforms.)

Back to this guy, Yasir Ali.  Something just didn’t seem right.  To us and to customers of ours who commented on the offer.  You see he’d stolen our design and posted it on HIS store on the site Alibaba.com. 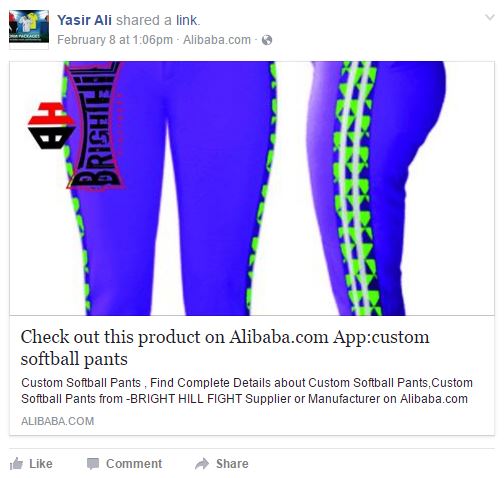 By any other price would not smell as sweet.

That’s an important little detail because production takes place in Pakistan,
triggering a $75.00 (!) shipping charge.  For some weird reason, in the international market, Pakistan is a hub of team uniform production.  Every single week since we have opened our doors (16 years ago), a Pakistani vendor has sent us an email asking us to buy from them.  Or they want to meet with us.  We ignore them all.

I won’t even get into the whole notion that, as a nation, they let bin Laden secretly stay within their borders for years, although that is fairly well documented.  We just have, as a company, no clue as to quality control in Pakistan.  Or on Alibaba.  Nor would we have any recourse if ANY issue were to arise.  Mr. Ali, of Bright Hill Fight, has already demonstrated what we have long suspected:  That no laws of the U.S. are recognized there.  No mutually agreed upon fair terms of competition are to be expected either.

So it is under these pretenses that we pass along the advice to any of the customers and prospective customers who ask about manufacturers, deals and other shady vendors in Pakistan and/or on Alibaba.

Henceforth Alibaba never will be TSP.

You are looking for the best value for your dollar for your team, don’t let a known thief in Alibaba steal from you, too.  Steer clear, in particular, of one Yasir Ali of Alibaba.

And if you’re out there in Sialcot City and listening, when we say Design-Your-Own, we mean it.